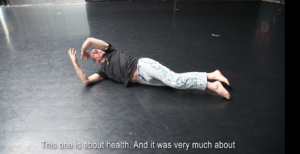 The transmigrations of the 1950s and 1960s to North America had an impact on American art and culture from both Japan and China. The Asian immigrant citizens seeded a subculture that permeated contemporary dance in later years. Specifically, New York City will be a meeting point for two Masters, Youshimitsu Yamada Sensei at the Aikido School: Aikikai of Manhattan and Zheng Man Ching in his classes in Brooklyn creating his teachings for students interested in Taijiquan-Tuishou.
These two references, Youshimitsu Yamada Sensei and Zheng Man-Ching are two essential figures who influenced the development of the Contact Improvisation style.
Directly in the 60’s-70’s Steve Paxton and indirectly Mark Young 30 years later. Thanks to this genealogy we can understand the keys of the Contact Improvisation style in two choreographers, Steve Paxton and, in our case, Mark Young.
This documentary tells the personal story of Mark Young, where life offers him a new opportunity to go in search of the sources of inspiration of Steve Paxton in the creation of the postmodern style of dance called Contact Improvisation. Mark Young unlike Steve Paxton, where Aikido becomes an essential source of wisdom, Mark Young delves into the roots of Taijiquan-Tuishou.Our documentary reflects the period of development and artistic reconstruction of the Canadian choreographer Mark Young.

Mark Young was hit by a 4 x 4 off-road car while riding his bicycle during a summer holiday in Vancouver in 1997. Mark suffered a fractured to the base of his skull as well as stroke and paralysis on the left side of his body. After the accident, in his quest to regain function, as well as find meaning in life, Mark Young reconnected with this postmodern dance modality called Contact Improvisation. In addition, Tàijiquán-Tuishou, Aikido or vipassana meditation became sources of inspiration and hope for Mark Young.
This documentary has been filmed especially for all those who are looking for a path to physical, neurological and psychological recovery. After two years of the worldwide pandemic caused by HCoV-19 (human coronavirus 2019), Contact Improvisation has been the most affected dance style. Now in January 2022 this documentary is released in commemoration of the 50th anniversary of the birth of the Contact Improvisation style founded, intellectually led and co-created by Steve Paxton (1939 Phoenix) and Nancy Stark Smith (1952 Brooklyn, New York/2020 Florence- Massachusetts).